Frank ‘The Chook Bloke’ Turton: Jewel of the Murray

A lot of people have told me I’ll meet some pretty interesting characters during my 6 weeks in South Australia.  It’s not that South Australians are any more wacky than the rest of the country, it’s just that so many of the places I’ll be visiting are small towns, often quite remote, and if any of the accounts I’ve heard are to be believed, it’s places like these where those great Aussie characters are found.

So yes, I fully expected to meet some funny country folk. What I didn’t expect was that I’d meet one less than an hour after arriving in the state! Roadies, let me tell you about Frank ‘The Chook Bloke’ Turton, the man I consider to be the Jewel of the Murray.

Frank is a local of Paringa, a small town near Renmark (a slightly less-small town 30kms or so from the Victorian border) in the Riverland region of South Australia.  Frank has a long list of titles to his name; retiree, busker, wood cutter, decorative wood burner, artist, lyricist, songwriter, singer, entertainer, ‘the chook bloke’ and houseboat builder.  It is the latter that drew my attention to Frank.

From a distance, Frank’s house boat the MV Willitsinkorwontit looks a little bit like a pile of floating junk metal… from mid-distance, it looks like a run-down abandoned houseboat…

… but it’s only when you get up close that you realise this boat is, in fact, a well-maintained, painstakingly crafted, floating art installation, depicting (as the stubby holders someone had made up for Frank so accurately put it) “A bit of Australian Culture”.

The windmill, the hills-hoist clothesline (complete with bras and undies for decoration), the outback dunny, the bathtub,  the impressive collection of coffee mugs hanging around the place (there must be at close to 100), the hand-painted murals, and the flower beds and veggie patches attached around the perimeter of the boat, all represent what Frank loves about Australia… And he’s just installed a flat-screen TV (see in the middle of the black map of Australia below). 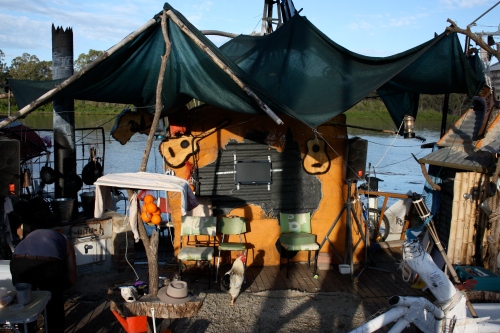 Although Frank’s wife doesn’t join him on his boat trips (“she won’t have a bar of it”, he says), Frank is kept company by his rooster and 2 chickens who also keep him in eggs; “they lay ’em on mi bed… they shit in it too” explains Frank, roaring with laughter.

Yes, it seems Frank has a soft spot for the feathered species – he didn’t earn the nickname ‘the chook man’ for nothing you know – he once toured the country in his car, towing a home-made, purpose-built shed for his chooks on the back (read about it here – scroll down about 1/2 way to “The Chook Shed On Wheels”). 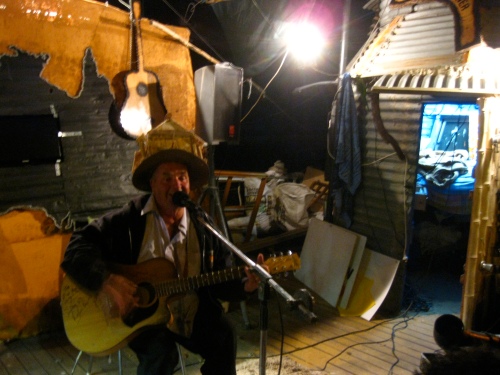 When he’s not performing his songs at the local caravan park or pub or the odd music festival (he’s even appeared at Tamworth country music festival), Frank likes to cruise his boat between Paringa and Renmark, providing impromptu singing performances for curious passers-by along the way. He writes most of his own songs- some funny, such as ‘Morning Dew Blues’, a song about the effects of morning dew on toilet paper, and some more serious, such as “If I had wings”, a poetic tune inspired by the abundant bird life that shares his river home. They’re all enormously entertaining.

Frank says he’s overwhelmed by the interest people take in him and his boat, particularly as all he wants to do is attract people to the Riverland area so he can make them smile –  if the gathering crowds of people clapping him on are anything to go by, this is something he is very successful at doing.

In a final twist (that is still making me smile days later), Frank has decided to run for Town Mayor this November; “The village idiot’s running for Mayor”, said Frank with a cheeky grin. Stranger things have happened (hello? the Govenator).  Politics  would certainly be more interesting with characters like Frank in the driver’s seat.

This entry was posted in South Australian Adventures, Tales from the road and tagged ART, AUSTRALIA, ENTERTAINMENT, PEOPLE, SOUTH AUSTRALIA. Bookmark the permalink.

4 responses to “Frank ‘The Chook Bloke’ Turton: Jewel of the Murray”